It is not heirless unless we say it is

In late January 2015, HASHAVA sponsored a visit to the kibbutz of Ein Harod and its museum of Jewish artists near Mount Gilboa. It turned into an opportunity to celebrate one painting in particular, The Beggar, by Eugeniusz Zak. Zak was a reknown Jewish artist who worked and died in interwar Paris. This magnificent, broody painting ended up at Ein Harod after following complicated paths by which hundreds if not thousands of works and objects of art displaced during the Holocaust had traveled to Israel from the site of their plunder. The uniqueness of this Zak painting lay in the visible and clear stamp on the back of its frame, indicating that it had been stolen during Mobel-Aktion in German-occupied Paris and catalogued at the Jeu de Paume Museum as MA-B 1330. 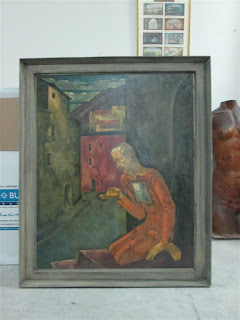 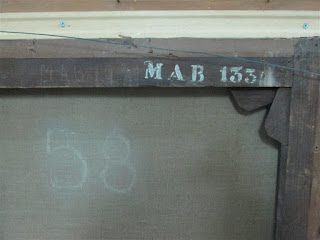 You can view the Zak painting under two different lenses: under one lens, it has no owner. It is heirless. It has a home in Israel where it is well cared for, as a living testament to the tragic events of the wartime occupation of France and to the physical disappearance of 76000 Jewish men, women, and children. Therefore, it serves a dual function: as a work of art and a memorial to lost lives.

Under another lens, the Zak painting’s provenance, its ownership history, is incomplete and requires further work in the hope of finding a pre-war owner with a view to returning it. All that was known about the painting’s history at the time of its discovery, aside from the name of its author and the painting’s characteristics, is that it was seized in the spring of 1944 in Paris, processed at the Jeu de Paume in June 1944 by Dr. Borchers, a senior ERR official. The painting was recovered by French resistance troops in late August 1944 and most likely sold by the French government on the postwar Paris art market.

The research involved in uncovering the rightful owner of this painting and therefore erase its “heirless” or ‘ownerless” label, involves, in part, the following steps:

1/ since there were few collectors in Paris who appreciated Zak’s works, it would be wise to draw up such a list because it might help us zoom in on a potential owner, especially if he/she was Jewish. Zak’s widow, Hedwige, would have been the more likely and near-exclusive source of Zak paintings in Paris. It would also be good to understand the Parisian market for such works.

2/ Once the painting is located either at the scale of a city or of a neighborhood within a city, archival resources falling outside the narrow strictures of art history need to be consulted. In the case of the Zak painting, the research points us in the direction of Mobel-Aktion and its coordinator in wartime France, the Dienststelle Westen which was itself an offshoot of the Einsatzstab Reichsleiter Rosenberg (ERR), Alfred Rosenberg’s Europe-wide specialized plundering task force. The Dienststelle Westen oversaw the day-to-day operations of Mobel-Aktion from 1942 until 1944. That involved: identifying the location of Jewish “residences”, placing seals on the doors of those residences—a cheeky German way of telling the Vichy French that they had no jurisdiction over the contents of those apartments—sending one or more teams of specialists to those apartments to survey their contents and prepare them for crating and removal; transferring the contents onto one or more trucks which would deliver them to Lagers throughout Paris, where plundered Jewish property was sorted and processed by Jewish slave labor, drafted for that purpose from the transit camp of Drancy in the northern suburbs of the French capital.

The fruits of Mobel-Aktion either went to Germany or remained in Paris to be further examined because of their perceived quality, workmanship, or value and importance. In other words, they were transferred to the Jeu de Paume where an additional selection took place. The Vichy French agency responsible for surveying Jewish residences in France, was the notorious anti-Jewish Commissariat Général aux Questions Juives, otherwise known as the General Commissariat for Jewish affairs. Its main task, from 1941 to 1944, was to oversee the material, economic expropriation of the Jews of France, seize and liquidate their property for the benefit of Vichy and Aryan non-Jewish owners. A working partnership tied the Commissariat to the Dienststelle Westen whereby French anti-Semitic agents would provide Dienststelle officers with names and addresses of Jews who had “abandoned” their apartments—either because they had fled or they had been arrested and interned, or worse, were already dead. The commissariat routinely published annotated lists of Jews with their last known addresses, sharing them with their Mobel-Aktion colleagues. Hence, from an archival standpoint, one should look for addresses and names of individuals whose apartments or houses had been fingered by Vichy agents and sealed off in late 1943 and early 1944. These records are located at the Memorial de la Shoah in Paris and at the US Holocaust Memorial Museum in Washington, DC. This would be one way of narrowing down the list of potential owners of the Zak painting. Then, one could take those names and look for postwar files submitted by individual victims or their heirs to the French government for purposes of restitution. These files are housed at the archives of the French Ministry of Foreign Affairs at La Courneuve, north of Paris. Those archives have allowed us, so far, to link 10 to 15 per cent of the so-called heirless or ownerless objects collected under Mobel-Aktion with their rightful owners. Hence, identifiability is not just a concept, it is a highly probable outcome of meticulous international archival research.

In order to fold this type of non-art historical research into the portfolio of a museum professional, the institution as a whole must make an explicit commitment to promote such research, through adequate funding, resources, and training. Such an institution must committed to the outcome of such research, retracing the intricate paths of ownership through and time and space of an object, regardless of its outcome, be it restitution, repatriation, or maintenance in the collection as a result of a negotiated settlement with the identified owner to his/her satisfaction.

No object is heirless unless it is labeled as such. Every object begins with an owner who happens to be its maker or creator. Once the object leaves its original, primal owner and the place where it sat or hung, the path of the object will either be licit or illicit depending on the circumstances of its removal, transfers, and the transactions that it was subjected to and the larger historical context in which these movements or translocations took place. Those are the objective facts which surround the life of an object and its peregrination through time and space. That is what constitutes the provenance of an object. To put it simply, every object is connected at any given point, to a person, to a location and to a date.

In my view, the paradox is as follows: An object becomes heirless because it has been labeled as such for reasons having nothing to do with the object itself. On the other hand, an object always has an owner, whether identified or not.

If one looks at the so-called MNR works—Musées Nationaux Récupération-- which currently sit in dozens of cultural institutions scattered throughout France, one realizes how foolhardy it is to treat art objects as wholesale bulk commodities. These works include paintings, works on paper, furniture, decorative objects and the like. They were retrieved by specialized French units from German and Austrian collections after 1945 and repatriated to France whereupon they were placed in an odd limbo-like category as of the early 1950s. The French government considers itself the custodian of those objects, although it has behaved more like an owner. In the late 1990s, a number of organizations clamored for France to release the MNR works—over 2000—so that they could be sold for the benefit of the Jewish people. The reigning assumption being that these objects had all been looted from Jewish owners. Nothing could be further from the truth as demonstrated by the French government’s painstaking research into these objects Although the research is far from over, it is safe to say that many of the MNR objects were owned and sold by them to the German occupiers on the wartime French market between 1940 and 1944. Hence, a rush to judgment based on a misunderstanding of the history of looted objects motivated by political expediency leads to inevitable miscarriages of justice and incoherent decisions.

Public and private collections worldwide contain an unknown number of objects for which there is no provenance, no history, therefor no understanding of who owned these objects. Take the countries that were part of Yugoslavia until its breakup in the early 1990s and apply that knowledge to Eastern European nations in the wake of the Second World War, you will soon realize that the problem of unidentifiable cultural assets sitting in those collections may be significant. Recent research conducted by a EU-funded provenance research project, TransCultAA, confirms that many postwar museum collections in the former Yugoslavia were largely comprised of unidentifiable looted cultural assets. The same logic applies to other countries in Eastern Europe, subject to additional long-term research.

Our functioning premise is that every object has an owner. To be true to that axiom, research has to be conducted into the history of the objects for which nothing is known so that something is known. And if it means dusting off a skeleton or two that brings back to the forefront some of the ugliest moments of recent history, then so be it. Regardless of who was responsible for the thefts and murders, the Ustasha, the Milice, the Rexists, the Einsatzkommandos, local townspeople abetted by their notables and their religious leaders, regional and State officials, paramilitary forces, anyone who partook in the commission of a crime against humanity—physical elimination accompanied by wholesale plunder—we need to have the maturity and presence of mind to tell the stories of these so-called “heirless” objects which are in our collective custody; they command us to do so. Their stories are our stories, our past, and therefore our present. If we choose to ignore them and pretend that the stories did not occur, we are simply lying to ourselves.

When a museum refuses to publish the provenance of an object in its care, regardless of its motivations not to do so, it is behaving unethically and denying our peers, our children, and grandchildren, the privilege of understanding where these objects came from, what they endured and how they ended up where they are today.